“The Sweet and Illustrious Tale of Taichiro Morinaga” 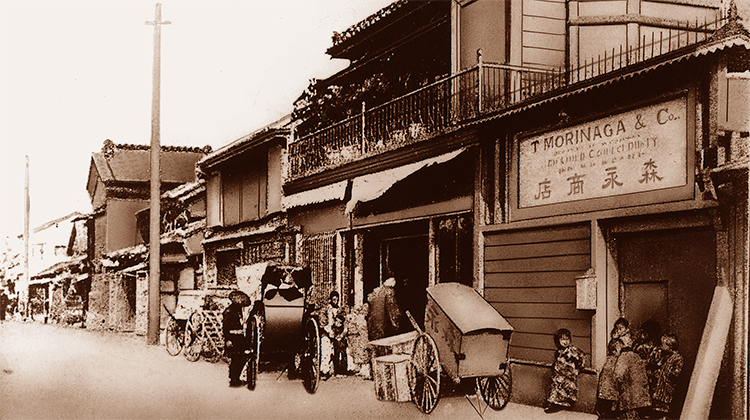 Most everyone in Japan knows and loves Morinaga — a sweets manufacturer with a history of nearly 120 years and one of the most trusted names in the business. What they don’t know is the story behind the founder, Taichiro Morinaga.

Taichiro was a ceramics merchant when he went to the U.S. in 1888 on a sales trip. Things didn’t go as smoothly as planned, and Taichiro had all but lost hope when one day, he had his first bite of a piece of caramel. Taichiro had never tasted anything so delicious.  Then and there, he swore he would spread the joy to his fellow Japanese.

After toiling as an apprentice in the U.S. for 12 years, Taichiro returned to Japan. He opened a tiny factory in Akasaka, Tokyo, that measured about 6.5 sq. meters and in that tiny space proceeded to make genuine Western-style sweets. Thanks to his efforts, the Japanese got their first, delightful taste of wonderments like marshmallow and caramel. Taichiro’s enterprise took off and the company expanded by leaps and bounds.

In 1914, the year of the Tokyo Expo, Morinaga came out with a megahit product: the iconic, yellow box of caramels. The cardboard boxes were light, portable and fit right into pockets. Each chewy morsel was individually wrapped and packed with sweet, milky flavor. At the Expo, they were sold as souvenirs and became an immediate sensation.

To get to this point, however, was a long, uphill journey for Morinaga. The basic ingredients in Japan were completely different from those in the U.S., so recipes had to be adjusted. The humid Japanese climate was a bane on caramel manufacturing. Therefore the meticulous packaging to offset these problems was, at first, too costly. One by one, Morinaga overcame these obstacles to become a revered and beloved household name.

Now, Morinaga has decided to revisit the company’s starting point and to honor the founding father by launching the Taichiro Morinaga brand. Like Taichiro, the company wishes to bring a whole new sensory experience to the Japanese. This is important in an age where most anything and everything can be bought online with a single click, and new taste encounters are hard to come by.

Morinaga has decided to call this new experience “okashi.” In Japanese, “okashi” means confectionery, but there’s also a whole other range of meanings, like “beautiful,” “fabulous,” “interesting” and “attractive.”  Deploying the skills and dedication honed over a century, Morinaga hopes to embody and redefine the “okashi” experience.

To this end, Morinaga has relaunched the “Hi-CROWN” chocolate series. Hi-CROWN made its debut in 1964, the year of the first Tokyo Olympics. The Japanese confectionery market was booming, and there was a particular demand for chocolates. To distinguish themselves from their many rivals, Morinaga paid special attention to the Hi-CROWN packaging. The chocolates came in a highly stylish box, similar to a cigarette packet and emblazoned with the company seal. Hi-CROWN came off as chic, fashionable and upscale.

The newly incarnated Hi-CROWN series come in a package reminiscent of a crayon box, and the chocolates themselves are beautifully wrapped and colorcoded according to flavor. Try the green colored pistachio: an artistic blend of pistachio nuts, caramel paste and chocolate. It’s a taste sensation unlike any other.

Another product in the Taichiro Morinaga line is the “Caramel Rusk” — a rusk baked from brioche rolls, and flavored with Morinaga milk caramel and plenty of butter. The taste is both nostalgic yet completely modern, the perfect companion to an autumn outing.

Hi-Crown Series
This iconic chocolate series is celebrating its 54th birthday with a brand new package design and 8 flavors (including the newly inducted pistachio, caramelisee, and aromatic matcha). Perfect for bringing to a party, or as a lovingly chosen gift.

Caramel Rusk
Baked from brioche rolls and packed with a milky, buttery caramel flavor, the Caramel Rusk boasts real artisanship. The first bite is crunchy, followed by a melt-in-your-mouth sensation that’s hard to forget. Take it with you on your fall outing!

Aeration Premier
This sweet is a masterful combination of aerated chocolate and a slightly bitter dark chocolate biscuit. The fragile chocolate mixture is so delicate it can’ t be handled at room temperature. However, it’ s baked to perfection with its soft, raw texture intact.